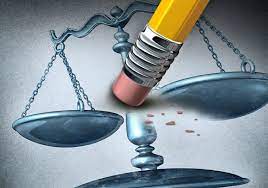 In yesterday’s judgment, the “virtual Supreme Court of Appeal” upheld the appeal by the CoGTA Minister, Dr. Dlamini-Zuma, against the Court order by Justice Norman Davis of the Gauteng Division Pretoria, handed down on 2 June 2020 in favour of the argument by Liberty Fighters Network and its Reyno De Beer. Davis had declared the Disaster Management Act Regulations as unconstitutional and invalid.

Instead of being the work of excellent jurisprudence one would expect from the Appellate Division, the five SCA judges Navsa, Ponnan, Mbatha JJA and Rogers and Unterhalter AJJA used the forum largely to whitewash their non-procedural ignorance of LFN and De Beer’s Application to recuse themselves for suspicion of bias. Instead of dealing with the actual arguments before them, De Beer, LFN – and by implication its members and supporters – were labelled “COVID-19 denialists.”

While LFN/De Beer’s key arguments were either misquoted and refused or completely left out of the judgment, even the most dysfunctional assertions by Wim Trengove SC appear to have been accepted by the SCA as some form of gospel. “In fact, the judgment relies so heavily on the Minister’s lead counsel that one might be tempted to suggest the much less troublesome option of simply letting the Government handing in its own judgements to be rubber stamped by the court in future,” De Beer jokes.

In relation to statistic evidence presented by De Beer, it is said that “… Mr de Beer is not a qualified virologist, pathologist, immunologist, medical doctor, laboratory analyst, or indeed any kind of scientist.” While this is undoubtedly correct, it was conveniently overlooked that the onus of proof for scientific claims made was on the Minister herself, as she had made them and which is something which she has failed to do, for more than one year. Instead, the SCA accepted the Minister’s version that she was properly advised by experts, even though she had also failed to provide any affidavit by any expert in support of that claim as well.

LFN and De Beer will be lodging their Application for Leave to Appeal against the irregular SCA judgment soonest and in great detail. Same will suspend the decision by the SCA and reinstate the power of the 2 June 2020 Court order.

The judgment ends by instructing the Registrar of the SCA to refer it to the National Director of Public Prosecutions. Then NPA is to investigate the possibility of instituting Contempt of Court criminal proceedings against De Beer for his conduct and certain remarks he made against the Court and it’s judges. An investigation could lead to De Beers criminal trial, where De Beer “…could call the judges to the stand and ask them a simple question: If a Court has lost its independence and has become an extension of Government, can such a Court still be regarded as a constitutionally founded Court and rely on a crime of Contempt of Court against anyone who questions its position?” De Beer will welcome an investigation by the NPA into the matter and shall happily supply the authority with his own intelligence into recent inner workings and concealed mechanisms of the judiciary.

Please consider making a voluntary donation of your choice in supporting our campaign to invest in your children’s future. LFN is the ONLY organisation that continuously opposes the Lockdown in our Courts and has pending matters before the Constitutional Court…